A method for triggering a laser synchro-signal diode in a single-pass quantum cryptographic system is proposed. The method allows reducing the level of stray in fluence in an optical fiber from scattered laser radiation by ~ 2 orders of magnitude and increasing the length of a single-fiber communication line when generating a secret key to 95 km.

A single-phase physico-mathematical model of a high-speed waterjet forming process that uses the underwater abrasive waterjet cutting technology while an abrasive-liquid flow under a pressure ranging from 60 to 80 MPa passes through the jet-forming path of a mobile abrasive waterjet machine has been developed. The results of a numerical experiment are presented. It has been shown that the main structural parameters of the internal profile of the jet-forming element (the profile of the focusing cavity, diameter and length of the output-channel) in fluence the geometric and kinematic parameters of the formed jet and the consumption of the hydro-abrasive suspension.

The existence of time-periodic solutions of the boundary-layer type to a two-dimensional reaction—diffusion problem with a small-parameter coefficient of a parabolic operator is proved in the case of singularly perturbed boundary conditions of the second kind. An asymptotic approximation with respect to the small parameter is constructed for these solutions. The set of boundary conditions for which these solutions exist is studied and the local uniqueness and asymptotic Lyapunov stability are established for them. It is shown that, unlike the analogous Dirichlet problem, for which such a solution is unique, there can be several solutions of this kind for the problem under consideration, each of which has its domains of stability and local uniqueness. To prove these facts, results based on the asymptotic principle of differential inequalities are used.

The Program for Calculating the Doppler Effect in the Spectra of Cosmic Radio Sources: «Dopplex»

The Program for Calculating the Doppler Effect in the Spectra of Cosmic Radio Sources: «Dopplex»

In this work, we discuss the theoretical background for calculating the Doppler effect for distant cosmic radio sources. For this approach, we developed a user-friendly efficient software based on the IAU SOFA astrometric library. Comparison with other software and services confirms its acceptable accuracy.

A new method for calculating the pairwise effective potential on arbitrary shells of the binary disordered solid solutions is proposed with account for the linear size effect. The method is based on the fitting of the order–disorder temperature calculated by the model potential method to its known experimental value. In disordered Cu3Au alloy, the pairwise effective potential is calculated and the short-range order parameters on the first fourteen shell are estimated using the Krivoglaz—Clapp—Mossmethod. A satisfactory coincidence with the experimental data is obtained.

The motion of stars in galactic disks is considered in the epicyclic approximation in a potential derived from gauge gravitation theory. It is assumed that the instability of circular orbits of stars with respect to small perturbations in such a potential can lead to the formation of spiral arms. We find the values of the unknown coefficients from the lagrangian of gauge gravitation theory such that they allow such an instability to occur.

Gauge Fields in the Theory of Condensed Matter and Helicity Conservation

Gauge Fields in the Theory of Condensed Matter and Helicity Conservation

A model of the quantum hydrodynamics of a charged particle in an external electromagnetic field is considered with account for the spin–orbit interaction and the influence of the Zeeman energy. The model is based on the formalism of introducing non-Abelian Yang—Mills gauge fields. It is shown that non-Abelian gauge fields generate forces, that act on the spin and spin current. It is demonstrated that the helicity of a particle moving on the background of such fields, that create forces that depend on the spin of the particle, is not conserved. A twofluid model of quantum hydrodynamics is developed for systems of electrons in spin-up and spin-down states moving against the background of the magnetic structure of a skyrmion with a nontrivial topology. A system of continuity equations, momentum balance, and evolution equations of spin density is constructed, and the helicity conservation for electron fluxes is proved in the framework of the proposed two-fluid model.

This paper presents the results of studies of the time and spectral characteristics of phosphorescence in organic compounds cooled to cryogenic temperatures. The data obtained after the analysis make it possible to propose a physical mechanism of excitation of long-term phosphorescence and assess the prospects for creating new active laser media (based on an analog of the Shpolsky matrix).

The dielectric properties of electrochromic composite material based on poly[4,40-(1,4-phenylene)bis(2,6- diphenylpyridinium)triflate] (PV) and multi-wall carbon nanotubes (MWCNTs) have been studied. Negative permittivity was registered at low frequencies of the alternating electric field (10$^{-1}$ – 10$^3$) Hz in the PV/MWCNT nanocomposites of different composition. The frequency of transition from negative to positive permittivity, as well as the values of conductivity, increased in the case of application of direct-current (dc) voltage. The physical mechanism responsible for the unusual properties appears to be related to the delocalized charges located at the multiple insulator–conductor interfaces. 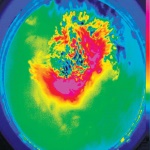 The capabilities of infrared thermal imaging at a rate of over 100 Hz to measure thermal fields of nonisothermal boundary liquid layer through an infrared-transparent window are analyzed. Experiments have been carried out to conduct an integrated estimate of the recorded water layer thickness for various conditions; it was shown that the penetration depth of infrared radiation in the operating range of the thermal imager (3.7–4.8 m) does not exceed 0.2 mm